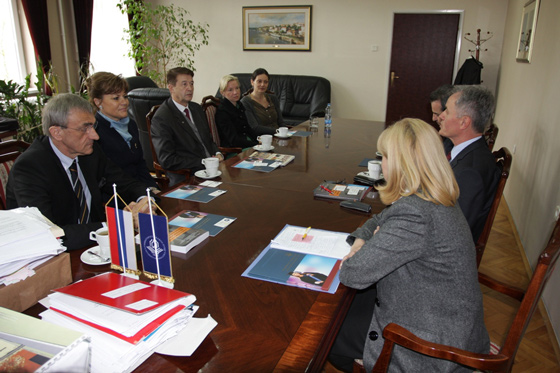 The guests from Russia and Slovenia also talked about the organisation and international cooperation of their respective universities, the exchange of students and teaching staff, the participation in international projects, as well as the prospects of future cooperation with the University of Banja Luka. Both Prof. Ljubimov and Prof. Jakulin expressed readiness to formalise the cooperation, and the first concrete steps were made towards signing the agreement on cooperation between the universities in Moscow and Koper with the University of Banja Luka.

At the meeting in the Rectorate of the University, there were also present Prof. Stanko Bejatovic, President of Serbian Association for Criminal Law Theory and Practice, MSc Milimir Govedarica, Head of the Department of Law, College of Internal Affairs, and Romana Schweiger, Head of Rule of Law and Human Rights Department of the OSCE Mission to Serbia, who previously attended with other guests the opening ceremony of an international scientific conference entitled “Penal Policy as an Instrument of State Reaction to Crime” , which was held in Banja Luka on 11-12 April.