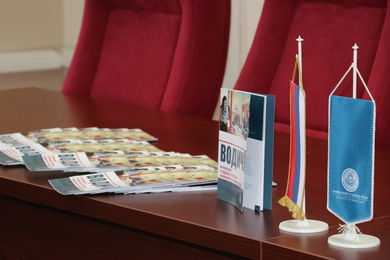 Membership in International Networks and Associations

Membership in international networks and associations is one of the important references on the willingness to cooperate with foreign partners, while it also contributes to the reputation and recognition of the University at an international level. On April 13 2011, the University of Banja Luka became a full individual member of the European University Association (EUA).

Since September 18th, our University is a signatory of the Magna Charta Universitatum, along with over 600 universities in the world.

UniAdrion promotes cooperation among Universities and Research Centres mainly through the realization of didactic initiatives, such as training courses, masters, research projects.

Their didactic structure is characterized by a blended approach, it means alternation between face to face (seminars, summer schools, a period of frontal lessons) and online modules through a Web learning environment.

The Agence Universitaire de la Francophonie (AUF) is an international association comprising universities, grandes écoles, academic networks and scientific research centers that use the French language all over the world. With a network of 812 members in 104 countries, it is one of the world’s largest higher education and research associations.

The AUF is also the specialist higher education and research agency for the Francophonie. As such, within their scope of competence, they implement resolutions adopted at conferences of heads of state and government of countries where French is spoken (Sommets de la Francophonie).

University of Banja Luka has become a full member of The China-Central Eastern European Countries Higher Education Institutions Consortium (abbreviated as CCHEIC) as of 13 May 2019.

Main goals of CCHEIC are: to build a platform for partnerships, bring out the member institutions’ initiative, consolidate and share resources and deepen education exchange and cooperation between China and CEECs so as to push forward educational development and consolidate the basis of sustained social, economic and cultural development in the region with the strong support of the people, as well as to support in-depth collaboration in science and research and other areas

As of 3 November 2018, the University of Banja Luka is one of the signatories of the Declaration of the universities of the Southeast Europe and Western Balkans, which foresees the establishment of the Community of Universities of the Southeast Europe and Western Balkans. The main goals of the community include, but are not limited to: enhancement of cooperation and capacities in the fields of science, education and research, enhancement of the quality of higher education, fostering of professor, associate, researcher and student mobility and active promotion of common interests in the European Union institutions.