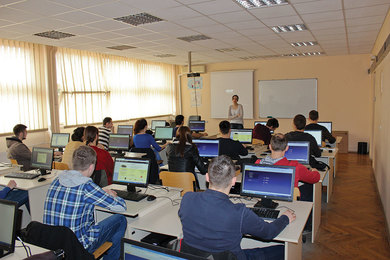 The Sports Commission is in charge of organising the “Student Sports Games” within the “Student Days” project and the “Student Brigade” memorial tournament as well as trips to sports games at the universities in neighbouring countries.

The Non-Formal Education Commission organises courses for students from the fields that are poorly or not represented at all in regular classes at the members of the University. In the last few years, foreign language and IT courses have been successfully carried out.

The Anti-Corruption Commission aims to prevent potential irregularities and combat corruption at the University.

The Law Commission is in charge of legal issues related to the functioning of the Students’ Parliament of the University of Banja Luka.  The Bologna Process Commission is responsible for making sure that the studying at the University of Banja Luka is conducted according to all rules and regulations of studying in accordance with the Bologna Declaration.

The Project Management Commission is in charge of ensuring that all projects implemented within the Students’ Parliament are completed in the best possible way, in order to meet the needs of all participants, especially the students of our university. The Humanitarian Work Commission has had very significant activities in recent years, and special attention should be paid to the areas in the Republic of Srpska that were affected by the floods from 15 to 25 May 2014. More than 2 000 students, organised into the Student Brigade, took part in this action. They got commendation for their hard work and the way they coped with the tasks in the field. The students especially showed their humanity when they bought food and water with their own money for those affected by the floods. The “Student Days” manifestation is one of the largest student projects in the Republic of Srpska. During this event, students of the University of Banja Luka have the opportunity to participate in cultural, sports, educational and entertainment events. The goal of this event is to promote students and student life, both at the University and in the city on the Vrbas river. It is held in April as part of the Day of the City of Banja Luka. Sports games are a particularly important segment of the “Student Days”, as students compete in all sports in the team and the individual sports alike. Manifestations are also organised for secondary school pupils. Namely, the “Open Day” is a manifestation at which secondary school pupils from all over the Republic of Srpska are introduced to all faculties and the Academy of Arts of the University of Banja Luka. In other words, they are introduced to all the opportunities they might have as students at this University. In addition to these activities, there are various conferences, professional meetings, concerts, open-air cinema, faculty festival, knowledge quizzes, entertainment events etc. The “Students Encountering Science” conference is a traditional students’ professional conference organised at an international level by the Students’ Parliament of the University of Banja Luka and the University of Banja Luka. This conference provides an opportunity for young scientists and researchers to put themselves to the test in an international context and learn something new in the scientific field they are studying for. It was first organised in 2008, with one goal - to open the door to science, research and new technologies for students. Students of the first, second and third cycle of studies are eligible to participate. In the past eleven years, this conference has brought together students from all over the world: from the USA, Russia, Great Britain, Germany, China, Turkey, India, Spain, Slovenia, France, the Czech Republic, Montenegro, Croatia, Serbia etc. Its interdisciplinary character enables students of different affinities to stand out and promote themselves, present their scientific and professional achievements, but also learn about the scientific achievements of students from other universities. Thus, young people are encouraged to do scientific research, and a healthy academic environment is promoted at the University of Banja Luka. The steering body of the Students’ Parliament consists of the Assembly and the Presidency, which comprises the President, two vice-presidents and the secretary. The former presidents of the Students’ Parliament were: Milan Grubor, Bojan Grebenar, Danica Kojić, Aleksandar Kecman, Kosta Lovre, Mladen Amović, Branko Petrović, Aleksandar Forca, Zoran Grahovca, Željko Sladojević, Branko Trninić, Nemanja Babić, Stefan Kremenović, and Nikola Bulović is currently the president of the Students’ Parliament.