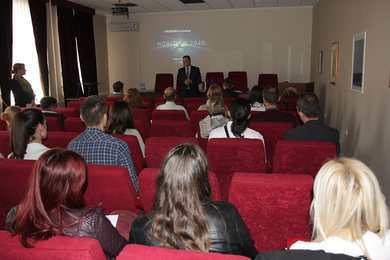 Activities of science and researchers at universities involve fundamental, developmental and applicative research. Results of scientific research include elements of originality, and are evaluated in peer review procedures and publication in scientific books and journals. The University of Banja Luka, as an academic institution, has continuously increased its capacities for scientific research. The number of students who graduate and specialist, master’s and doctoral theses which are defended per year is on the rise. Prerequisites for scientific research are sufficient laboratory space, well-stocked libraries and modern technical aids, which facilitate presentation of results achieved. The University of Banja Luka has the appropriate laboratory space and equipment at its disposal, but having in mind technical and technological developments, continuous material investments are needed to keep up with global trends.

Institutes established at the University level provide for multidisciplinary research. The institutes carry out fundamental, development and applied research. In their academic practice and research projects they demonstrate a combination of learning and research with multi-faceted responsibility: to learn and manage projects, to maintain tradition while being innovative. The first institute at the University of Banja Luka was formed 20 years ago, and the majority was formed between 2002 and 2007. The University’s researchers have been involved in international and domestic projects, the most distinguished of which, in terms of funds granted, were the projects financed by the European Commission (FP projects, Horizon 2020). Following the principles of the Bologna declaration, the University of Banja Luka offers programmes in all three cycles of studies. Students of the second and third study cycle are required to engage in scientific research in preparation for drafting their final papers. Under the Law on Scientific Research, first cycle students should be gradually introduced to the process of scientific research, under the guidance of the academic staff. The successful cooperation of our academic staff with the students resulted in notable participation of our students at international student conferences. The management of the University, in cooperation with the Students’ Parliament and the faculties’ and the Academy’s student associations, organizes the scientific-professional conference “Students encountering science”.

The University of Banja Luka supports the founding principles of open science, which are applied to the overall process of producing scientific and artistic results, from securing funds and meeting donor requirements (i.e. within the Horizon 2020 programme) to depositing scientific papers, applying research results in practice and monitoring the effect of scientific work. The aim of the openness principles is to make science more transparent, visible, efficient, just and democratic. Open science is most commonly associated with open access to publications, but the notion is much broader and encompasses many more principles, such as: open data, open reviews, open methodology. Even though the idea of open science is simple, the implementation of its principles is a much more complex process, requiring the existence of suitable technical infrastructure, legislation and competences. By implementing the NI4OS project (National Initiatives for Open Science in Europe), the University is showing its dedication to the European Open Science Cloud (EOSC).

The University of Banja Luka joined the rank of institutions who have signed the Berlin Declaration on Open Access to Knowledge in the Sciences and Humanities in 2016. Among the signatories of the Berlin declaration are some of the world’s leading universities, scientific institution and foundations. The mission to spread knowledge is only partially met if society does not have widespread and simple access to information. It implies that this is the only way to disseminate knowledge not only in the traditional forms, but increasingly through the paradigm of open access online. At the OpenAIRE General Assembly, the University of Banja Luka was confirmed as member of this European research network in January 2020. The mission of OpenAIRE is to shift scholarly communication towards openness and transparency and facilitate innovative ways to communicate and monitor research, and to transform society through validated scientific knowledge. The platform allows citizens, educators, funders, civil servants and industry to find ways to make science useful and comprehensive for themselves, their work environment and the society. The network enables researchers, foundations and research administrators to accept open science. In March 2014, at their 26th session, the Senate of the University of Banja Luka, in line with the Statute of the University and the Rulebook on Publishing Scientific Publications of the Ministry of Science and Technology of the Republic of Srpska, adopted the Rulebook on Publishing of the University of Banja Luka. The Rulebook provides the general requirements and manner of publishing at the University, as well as quality standards which need to be fulfilled when used for professional, scientific or artistic education at the University of Banja Luka and its members. It also defines standards for ensuring and controlling the quality of publications issued by the University or its members. The publishing activities at the University include publishing any print, audio-visual, digital and electronic publications: books, translations of valuable books, textbooks, monographs, proceedings, reports from conferences, congresses and symposia organized or co-organized by the University, journals, off prints, catalogues, brochures, posters, flyers, postcards, calendars, microfilms, video and audio recordings, as well as electronic editions: CD, virtual publication online, articles published websites. Pursuant to the Rulebook, the University of Banja Luka Publishing Committee was formed.

The University Publishing Committee is a professional body, comprising the vice-rector for scientific research and development, vice-rector for teaching and student affairs, and seven other members, making sure that there is one representative of each scientific area. Since 2014, the University of Banja Luka has participated as an independent exhibitor at the International Book Fair in Banja Luka, but also at the International Belgrade Book Fair, where the University’s publications are exhibited at the stand of the Representative Office of the Republic of Srpska in Serbia. In the past six years, publishing activities within all members of the University has intensified. In the last two years, the University of Banja Luka was invited by the Vojvodina Provincial Secretariat for Higher Education and Scientific Research and the management of the University of Novi Sad to take part in the “Putokazi” International Education Fair, where it presented its faculties and study programmes, but also its publications. It is worth noting that eight libraries of the University’s members have been connected to the COBISS RS system in two stages, as part of the cooperation between the University of Banja Luka and the National and University Library of the Republika Srpska, under the project COBISS RS of the National and University Library of the Republika Srpska. The libraries connected to this system are of the Faculties of Political Science, Architecture, Civil Engineering and Geodesy, Law, Agriculture, Economics, Technology, Medicine and Philology, and the Institute of Genetic Resources. Since 2015 the number of libraries has risen substantially, from 14 to 19, with significantly increased capacities for not only academic publications, but also reading rooms, with continuous modernization of the equipment required to optimize the workflow of the librarians, and consequently the libraries themselves. The library inventories of all the University members were significantly boosted in 2017, when the Elea company from Brčko donated 867 valuable books (594 titles) of world-renowned publishers. Another thing to note is the Austrian Library, which operates on the premises of the Faculty of Philosophy and contains over 5000 books in Austrian literature, history, linguistics, sociology, political science, economics and law. The library’s fund includes audio recordings, as well as a collection from a private Austrian library with an international humanistic focus. The task of the Austrian library is to organize cultural and other activities.

There are currently active 12 journals at the University, which belong to the first three categories in accordance with the Rulebook on Publishing Scientific Publications of the RS Ministry of Scientific and Technological Development, Higher Education and Information Society – four journals are in the first category, six are in the second and two are in the third category. There are plans to launch or revive several other magazines at the University.

A great step was made in the University’s publishing with the signing of the Berlin Declaration on Open Access to Knowledge in the Sciences and Humanities, in accordance with the Senate’s Decision from 2016, when the University joined the initiative. The fundamental aims of the Declaration are directed towards promoting scientific discussion and making it available to as broad an audience as possible, thanks to the ever-growing possibilities of electronic communication. In that light, the Berlin declaration defines what kind of content should be published in accordance with open access principles. Open access papers include original results of scientific research, unprocessed data and metadata, sources, digital versions of images and graphics and the scientific multimedia records. Pursuant to the Decision, the University of Banja Luka established a Digital repository of PhD theses, and soon of MA theses as well. The establishment of the Phaidra system (Permanent Hosting, Archiving and Indexing of Digital Resources and Assets), under the TEMPUS project: “New Library Services at Western Balkan Universities” and with the support of the University Library “Svetozar Marković” in Belgrade, enabled digital storage of doctoral and master’s final papers, in line with the Rulebook on the Content, Format and Digital Repository of PhD Theses (adopted in 2016) and the Rulebook on the Content, Format and Digital Repository of MA Theses (adopted in 2017), which provided not only for the digitalization of PhD and MA theses in line with the Rulebook, but also ensured consistency of their content and format.

An important milestone in the modernization, development and improvement of activities of scientific research and publishing at the University is certainly the procurement of the iThenticate software, intended for plagiarism detection. This activity was facilitated with the adoption of the Rulebook on Plagiarism Detection for PhD and MA theses (2017) and the Decision of the University’s Senate to expand the use of the software to papers due for publication in any journal or proceedings issued by the University members (2019).