The EURAXESS bus visited the campus of the University of Banja Luka on 2nd April 2014, from 10 am to 4 pm. The EURAXESS bus is part of the "EURAXESS Road show "campaign which is carried out by the European Commission in cooperation with universities and national EURAXESS networks, with a view to promoting the mobility of researchers. 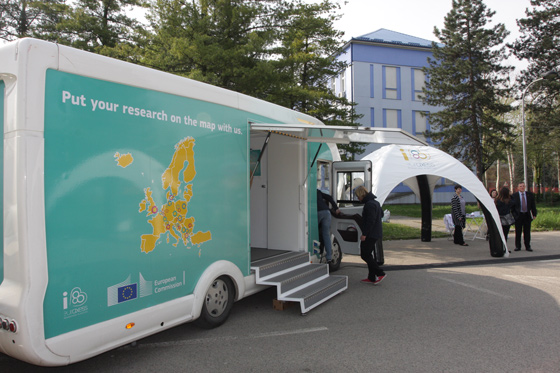 The campus of the University of Banja Luka was one (and the only one in Bosnia and Herzegovina) of the 31 stations where the EURAXESS bus stopped on its way through 22 European countries.

The one-day program, during which the EURAXESS promoters, together with the local staff, students, researchers were giving pieces of advice and information regarding the improvement of scientific career, finding a job, writing CVs, working permits and visas and funding opportunities, took place in the parking lot in front of the Faculty of Philosophy, the University of Banja Luka and in the Conference Hall of the Rectorate. 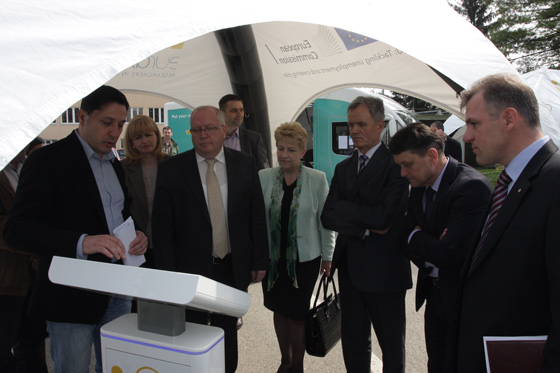 Apart from students, researchers, the Rector and the Vice-rectors, the program was also attended by the Minister of Science and Technology, Prof. Jasmin Komic, and the Deputy Minister for Higher Education in the Ministry of Education and Culture, Ms Radmila Pejic.

Minister Komic used the opportunity to highlight the importance of such an event on the campus of the University of Banja Luka in terms of participation of our researchers in the European research area. He also remarked that the Ministry through its programme activities tended to contribute to the mobility of the researchers from the Republic of Srpska and that the Ministry financially supported their participation at the international scientific and professional events and meetings, including their specializations abroad. The Minister also said that the amount of the investments into scientific and research development had been increasing year over year.

The Deputy Minister for Higher Education in the Ministry of Education and Culture, Ms Radmila Pejic, pointed out that the Ministry supported all projects that involved scientific and research work. Ms Pejic expressed her contentment arising from the fact that the Member States and the European Commission had recognized the University of Banja Luka and its young researchers as scientific and research potential and included them into this project.

Prof. Stanko Stanic, the Rector of the University of Banja Luka , reminded all the present of the fact that, at the time when this project was only hinted at, other universities from BiH perceived the idea with skepticism, resulting in their unwillingness to accept the participation in this project. However, the University of Banja Luka embraced the project without any dilemmas whatsoever, since the project is very important not only for the students from our University but also for the whole academia from both entities, and it provides the mobility of researchers and the access to European research base. 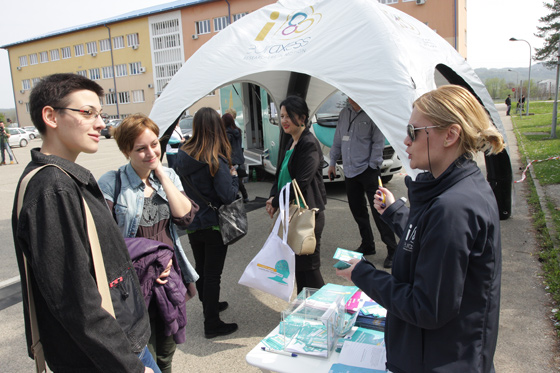 Prof. Milan Mataruga, the Vice-rector for scientific and research development, explained that students who visited the bus would have a chance to send their CVs, which would be incorporated into the common data base , and that they could find information about all vacancies for scientists and researchers throughout Europe and other information for development of scientific career.

The guests, accompanied by the hosts, visited the bus in which a professional camera for digital photography was set up and where researches had a chance to upload their CVs at the EURAXESS Jobs portal, thus enabling employers to find and contact them. 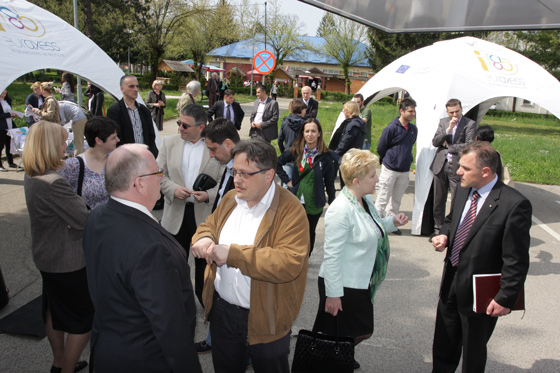