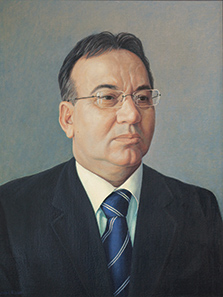 Dragoljub Mirjanić was born on 2 November 1954 in the village of Romanovci, Gradiška Municipality. He finished primary school in 1969 and secondary school in 1972, Teacher-training Academy (mathematics-physics) in 1974, and the Faculty of Natural Sciences and Mathematics (physics) in 1977 in Novi Sad. He attained his master’s degree in 1981, having defended his paper “Influence of mechanical oscillations on crystalooptical phenomena”. He defended his doctoral dissertation entitled “Analysis of dielectric properties of molecular crystals and ferroelectrics” in 1983 at the Faculty of Natural Sciences and Mathematics in Novi Sad. At the University of Banja Luka, he was elected as a teaching assistant in 1977, senior teaching assistant in 1981, assistant professor in 1983, associate professor in 1987 and full professor at the Faculty of Technology in 1991 (scientific fields: general physics and biophysics). He served as dean at the Faculty of Technology and the Faculty of Medicine. He served as rector of the University from 1992 to 2006. He served as vice-president of the Republic of Srpska from 1996 to 1998. He participated in establishing the inter-state academic associations UNIADRION and AIMOS. He was a member of the Conference of Rectors of European Universities, president of the Republic of Srpska Council for the development of higher education in the Republic of Srpska and chairperson of the Higher education coordinating board of Bosnia and Herzegovina. He was accepted as an associate of the Academy of Sciences and Arts of the Republic of Srpska on 27 June 1997, and as a member on 21 June 2004. He was the secretary of the Academy’s Department of Natural Sciences and Mathematics (1997-2000), and since 2000 he has been secretary general at the institution. In addition, he has been a full member of the Central European Academy of Sciences and Arts since 1997, the Balkan Academy of Sciences and Culture since 2001, the Romanian Ecologica Academy since 2002, the National Academy of Higher Education of Sciences of Ukraine since 2012, the European Academy of Sciences and Arts since 2014, and the Russian Academy of Natural Sciences since 2018. He authored or co-authored over 800 publications, the majority of which are scientific papers, monographs and textbooks. He implemented 60 scientific projects, 40 of which were international (organized by the UNESCO, Council of Europe, World Bank, OEBS, European Commission, as well as individual EU member states and the USA). He presented 370 papers at scientific conferences, eight of which as keynote speaker. He is the president or a member of numerous scientific and organizing committees, member of editorial boards and reviewer for dozens of congresses, conferences and magazines in the country and across the world. He lives and works in Banja Luka.