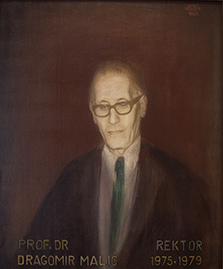 Dragomir Malić was born on 28 October 1913 in Oštra Luka, near the town of Sanski Most. He finished secondary education in 1936 in Banja Luka. He graduated from the Department of Mechanical and Electrical Engineering at the School of Engineering in Belgrade in 1941. He defended his doctoral dissertation at the Vienna College of Technology in 1949. He was elected as assistant professor and associate professor at the Belgrade School of Engineering. He was elected as full professor at the Belgrade Faculty of Mining and Geology in 1960 (scientific field: Thermodynamics).

Before being elected as the first rector of the University of Banja Luka, he spent more than three decades bringing up new experts and (re)organizing higher education institutions in Belgrade, Sarajevo, Niš, Priština and Banja Luka. He served as rector of the University of Banja Luka until he died on 8 June 1979. He had published 134 scientific papers and several textbooks in thermodynamics and cybernetic thermodynamics, earning world-wide recognition as an expert in thermodynamics. Among other things, he served as the vice-chairman of the Scientific Council of the International Centre for the Transfer of Heat and Mass, he was an associate of the Academy of Sciences of the Socialist Republic of Bosnia and Herzegovina, he was elected as vice-rector of the University in Belgrade twice, and served several times as the dean and vice-dean of the Faculty of Mining and Geology in Belgrade. He received numerous awards and highest recognition: Order of the Red Banner of Labour, Order of Merit with the Gold Star, the “Kolubara 67” award for highest scientific and professional achievement in production and transfer of electricity, the “7 June” lifetime achievement award of the Socialist Republic of Serbia, the “Nikola Tesla” award for exceptional contribution to science and the development of the “Nikola Tesla” Society, the “Veselin Masleša” award of the Socialist Republic of Bosnia and Herzegovina. A street in the Banja Luka neighbourhood of Simo Matavulj bears the name of Dragomir Drago Malić. He was buried in the Alley of Distinguished Citizens in the Belgrade New Cemetery.