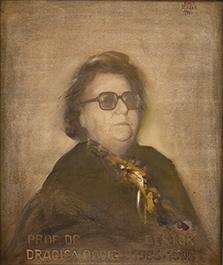 Dragica Dodig was born on 15 September 1926 in the village of Kosijerovo, in the Laktaši municipality. She attended the Banja Luka gymnasium from 1936 to 1944. She enrolled in the Faculty of Technology in Zagreb in 1945, and graduated on 22 February 1952 at its Department of Chemistry and Technology. She defended her doctoral dissertation in 1964 at the Tuzla Faculty of Technology.
From 1 April 1952 she worked at the Lukavac Soda Factory as head of laboratory, and two years later she took over the production line for soda bicarbonate, technical chalk and soda crystals. From 1 March 1955 she was employed at the Banja Luka Cellulose Factory, where she was immediately directly involved in organizing the future laboratories and appointed as head when the plant became operational in December 1959. She got employed at the Faculty of Engineering in Banja Luka in 1963, where she became associate professor in 1969 (scientific fields: inorganic chemistry and chemical technology).
Aside from her distinguished scientific, professional and social engagement, she is noted for her position of vice-chairperson of the Banja Luka Municipal Assembly (1974). In addition to having been the rector of the University, Dragica Dodig was a vice-dean of the Faculty of Engineering, as well as the first dean of the Faculty of Technology (1975–1977 and 1983–1984).
She passed away on 15 January 1999.