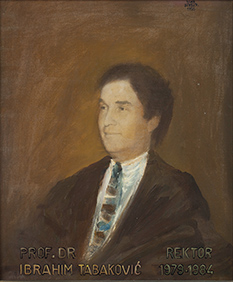 Ibrahim Tabaković was born on 31 August 1942 in Banja Luka, where he finished primary and secondary education. He graduated from the Department of Chemistry and Technology at the Faculty of Technology in Zagreb in 1966. He drafted his master’s paper in the Organic Chemistry Laboratory of the Faculty of Technology in Zagreb, where he defended his thesis in July 1971. He drafted his doctoral dissertation at the Faculty of Technology in Zagreb as well, and defended the thesis on 1 October 1973.
In 1967 he was hired at the JNA College of Technology in Zagreb as a tenured teaching assistant, and in 1973 as an assistant professor. During 1974 he attended postdoctoral studies at the University of Southampton, and in late 1975 he was in specialization at the University of Aarhus. He was elected as assistant professor, associate professor and full professor at the Faculty of Technology at the University of Banja Luka (scientific fields: organic electrochemistry, organic synthesis, and biochemistry). He was an internationally renowned chemist, having given numerous lectures upon the invitation of prestigious universities across the world, such as: University of California, University of Copenhagen, University of Minnesota, as well as other universities in France, England and Germany. He held 85 presentations at scientific congresses in Yugoslavia and around 100 at international conferences, including seven plenary lectures. He was also the chairman of the Presidency of the Union of Universities of Bosnia and Herzegovina and a member of the binational American and Yugoslav committee (the Fulbright programme). He published 165 original scientific papers, seven reviews, three books and three chapters in scientific monographs. The greatness and significance of professor Tabaković’s scientific contribution is also supported by a very high citation frequency, even including papers from the 1970s (over 2500 citations).
From 1977 to 1979 he served as a vice-rector of the University. He was elected as rector of the University at the age of 37, becoming the youngest rector in the history of the University, a record which he still holds. From 1986 to 1989 he served as Minister in the Yugoslav Government under Prime Minister Branko Mikulić. In the Government, prof. Tabaković carried out activities on the development of economic, political and scientific cooperation with non-aligned countries. He was appointed as chairman to the Steering Board of the Solidarity Fund of the SFRY for Developing Non-Aligned Countries.
He left for the United States of America in 1993, to work at the University of Minnesota, where he was hired as professor of organic chemistry at the Department of Chemistry. In late 1997 he completely changed his career and went to work as an engineer at Seagate Technology in research and development for disc-drive writer materials, which are most efficiently produced via electrodeposition. In the following 16 years, prof. Tabaković was promoted five times for his scientific contribution. Before long, he became Seagate’s chief Technologist and Research Leader in electrodeposition. He entered the Seagate Technology Hall of Fame in 2012. He authored 40 US patents and 34 Seagate’s trade secrets. Two products – writer materials, specifically 1.8T CoFeNi and 2.4T CoFe, developed by prof. Tabaković’s group, were installed in over 2.2 billion computers sold in the world.
In 2013, professor Tabaković was again hired as professor at the University of Minnesota (Department of Electrical and Computer Engineering) from where he retired on 1 January 2019.